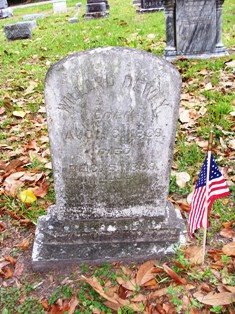 This stone at Greenwood Cemetery in dowtown Orlando doesn't reveal too much about the fellow it memorializes.

It's hard to read, so here's a transcript for ye rabbits:

I tried the usual sources of additional biographical information, but completely struck-out with the federal census.
I did find a Civil War service record showing he served as Quartermaster Sergeant in the 27th Kentucky Infantry Regiment.
But, it was only by checking a recently-discovered source on citrus farming that I found out more about Mr. Dewey:
http://www.fshs.org/
The site belongs to the Florida State Horticultural Society, and if you click on the "Proceedings" tab you will find they have kindly digitized their records dating back to 1888. It was in these records that I found the Committee on History's "paper number 6," about the history of orange plows. It was written by W.W. Yothers, an Orlando entomologist, who remembered Mr. Dewey as the owner of a grove about 3 miles south of Orlando, and quoted a letter from the Avery Plow Company in Louisville, Kentucky, dated 23 November 1918, which stated (in part):
An old and highly esteemed member of our staff
was Mr. Willard Dewey, foreman of our forge shop.
After years of faithful service he moved to Florida,
partly for the purpose of seeking relief from rheu-
matism. He acquired an orange grove, and at that
time the cultivation of groves was either not done or
done in a primitive way. This was about 1885.
He decided that the cultivation of orange groves by
plowing, to keep the groves free of grass and weeds,
was advisable, and he applied intensive cultivation to
his grove along this line . . . This improvement was made
in 1889, as the result of several years study preceding.
Mr. Dewey, like many of our pioneers, came to this neck of the woods only after the rail lines were established and thus missed the 1880 census enumeration. We all know the 1890 census records were lost to fire. So, it is important for we rabbits to broaden the scope of our search when we're trying to find out more about people whose grave markers were erected in this time frame. Don't just check the census and vital records, try contemporary periodicals, too!
Posted by wsmv at 11:39 AM