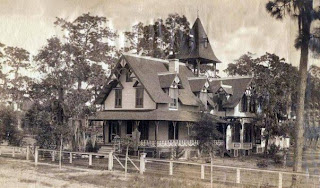 Not all the graves in this little corner of heaven are to be found in formal cemeteries.

In pioneer days, folks were often laid to rest in the back yard, close to their survivng loved ones.

Back in January 1884, Harriet F. Switzer described one such burial of a neighbor at the old Welborne house on Interlachen in Winter Park:

Well, this morning, Mrs. Chapman and Mrs. Lyman drove up to tell us of the death of Judge Welborne's wife who had been suffering from consumption for a long time and at last succombed. The funeral is to be this afternoon and, "Would I help with the [illegible]?" There is so little one can do at such a time that I hesitantly, yet gladly too, said I would. I don't see that you could have done anything else.

I wish I had an artist's brush to paint [the] service. Instead of the close room we had expected, we were taken to the end of the garden. On the sloping bank of a beautiful lake was an open grave, but so [illegible] with green there was no earth showing. The sun danced and sparkled on the water and shone through the trees onto the plams, fur branches, and flowers carpeting the last royal resting place of a tired and worn out body.

Bishop Whipple's tall, commanding figure with his silvery hair, which he always has rather long, and the touch of colour [sic] given by his purple skull cap made the picture most impressive. Then the group of mourners and friends, the [illegible] colored men. Oh, their varying expressions! That was the human side.

But, above all was the sun, blue sky, and the stately pines that whispered peace as we sang "Faith's Journey Ends in Welcome to [illegible]." We knew that "life's long shadows" were forgotten, swallowed up in the "cloudless love" and that she who had suffered so long and so patiently was experiencing the "joy that ends the night of weeping."

Wow! That sounds rather lovely.