Who was Wyman R. Brown? 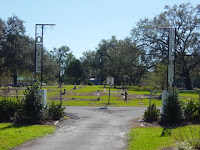 Today's history mystery has us rabbits hopping out to Ocoee, a small town west of Orlando on SR 50.

Ye local rabbits have no doubt sped along this stretch of highway several times, not realizing there was a graveyard ripe for hopping just north of Lake Blanchard.

The cemetery entrance is actually where Story Road dead ends. 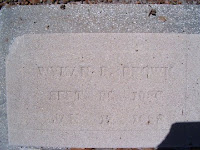 Anyway, the oldest markers in this old graveyard are clustered in the back of the property.

Among them, I found this hard-to-read stone bearing the inscription:

Unforutnately, I haven't been able to find out anything further on our mystery man. There was a W.R. Brown included in the 1880 census of Orange County, but he was too young to be this fellow. So, who was Wyman R. Brown?
Posted by wsmv at 9:23 AM

I'm sure you'll find out who Wyman was. I enjoy reading your Graveyard Rabbit blog and have given you a Kreativ Blogger Award. You can pick it up at Tennessee Memories.

I've nominated you as a Kreativ blog. You'll find the details at http://family.moultriecreek.us/?p=1922